Remember a month or two ago when I mentioned that my self-control was out getting donuts? Well, I'm sorry to report that things haven't gotten much better since that post was written.

Not only am I still woefully out of control when it comes to what I allow to go in my mouth (a few dozen homemade gingersnap cookies might, or might not, have disappeared in our house this summer), but my ability to manage my time has slipped as well.

Until today. When I suddenly realized, "Hey, if I don't have the self control not to look when I get a Facebook notification, perhaps I should just log out of Facebook!" It seems so simple, but I never claimed to be Einstein.

The results? Five and a half hours of work on the clock, lots of tasks checked off the list, and I still have half a day awaiting me. Which makes me wonder how much time I have wasted on Facebook over the last six years since I first signed up? I probably don't want to know.

And what could I have done instead? That's the real question, isn't it? How often do you evaluate the time you spend online? How often do you check Facebook, Pinterest, or Twitter? How many hours do you spend blog hopping or browsing on Amazon? How many times have you been tempted into buying something you didn't need because you were killing time in online stores?

Over the last few months, I've complacently watched my hard-earned self-control fly the coup. Last year, we were mega stars when it came to controlling our impulses because we had a goal we were working towards. But when we reached that goal in November, we relaxed, and that's when things started to slip.

It's been a bit like giving a mouse a cookie. While not piling on the debt, we aren't saving like we could, and should, be. When we're not as tight with our monthly food budget, we end up going out to eat more often because it's easier. And when we go out to eat, it's usually carb heavy and quite often includes dessert (see paragraph 1, re: self-control). Sitting in front of a computer all day has encouraged the sedentary life, which de-motivates us from using the treadmill that was formerly used on a regular basis, which has led to the reversal of our 2010 loss. 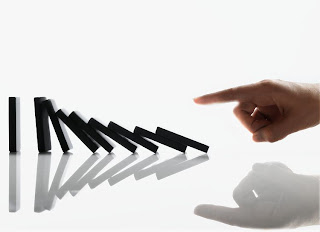 So here's my plan: by building up self-control in one area, even if starts as simply as logging out of Facebook because I recognize it as an area of weakness, it will have a domino effect. Recognizing areas of weakness is the first step, then it's time to start taking action. My action today was logging out of social media so I could take care of business. Success #1.


What steps do you take to set yourself up for success and not failure?