Since we started the South Beach Diet the end of January, I've written about our progress, and shared various recipes that fit with the diet. I've even written a post about our South Beach-friendly pizzas that I make at home. But over the months of being on this diet, I have gotten a little better with the pizzas and we now make them on some wonderful low-carb, low-sugar, high protein tortillas. Tell me this doesn't look delightfully yummy?! 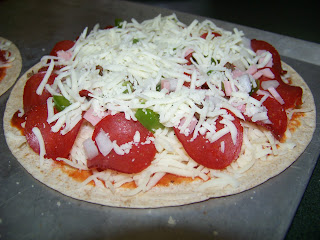 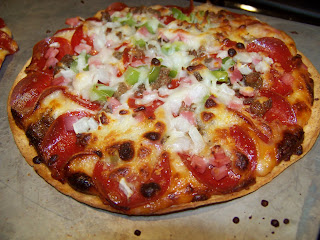 Ingredients usually include:
Low-carb tortillas
A hint of tomato sauce
Low-fat mozzarella cheese
Low-fat turkey pepperoni (which we really like - not as greasy!)
Chopped Canadian Bacon (I got it on clearance, chopped, and froze it)
Chopped green peppers (also on sale, chopped, and frozen)
Chopped onions (red or white)
Low-fat sausage (that we seasoned into Italian sausage)
Mushrooms (if we have them and they strike our fancy)
One pizza per person fills us both up. Since I like thin-crust pizzas, the tortillas work great for me. Peter still misses the thick bread crust like Papa Murphy's has, but this pizza is better than no pizza at all! :-)
And now for the drum roll...DIET UPDATE!
At the time of writing this (June 30), Peter has lost 33 lbs. since February (55 lbs. in the last year), and I have lost 14 lbs. since February (24 lbs. in the last year)! To say we are excited would be an understatement. Peter really wanted to be bit lower by the time we went to the beach this summer, but now he is to the point where he is thankful he is still losing and he knows he is losing at a very healthy rate (approx. 0.5 - 1 lb. a week). He made the comment this morning that it has taken work and self-discipline, but it wasn't as hard as he was expecting it to be. I'm so proud of him...of both of us! :-)
If you're looking for a way to lose weight (and keep it off), I really encourage you to try the South Beach eating life-style. I really don't even look at it as a "diet" - but rather as making healthier eating choices and chosing to make exercise a part of our life as well. We're not crazy exercise people - we just walk on the treadmill a few times a week - nothing hard. Anyway, this gets two thumbs up from us! :-)