A Crisis of Punctuation...

Over Christmas, I saw a pillow in the Nester's house during her annual holiday home tour that stopped me dead in my online tracks. I loved the look, went to Etsy, and purchased one (in blue) from some great gals in South Africa. It arrived shortly before Christmas, but I planned to use it in January, so I tossed it in the office and didn't think about it again until I was sprucing up the house on New Years Day.

The pillow cover came without a form, so I stuffed it into one that I already had and threw it on the couch, delighted with the fresh new look it gave the living room. And then I gasped in grammatical horror. Anyone see what I saw (though missed in my initial exuberance)? 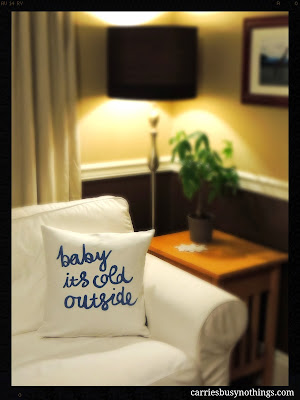 If you're someone who has a problem remembering when you need an apostrophe, and when you don't, this would be a time when you do. Baby IT IS cold outside. Too long? Baby it's cold outside. With my love for punctuation (and yes, even I screw up - more often than I would like to admit!), and my love of Mma Ramotswe, I have dubbed this: The Case of the Missing Apostrophe.

And being the slightly OCD person that I am, I emailed the shop owners, requesting that they fix the error on their next pillow printing, though I added that I would let the missing comma (after "baby") slide, since it is a song. I'm sure they are rolling their eyes at the weirdo in the States. So be it.


Now, if you'll excuse me, I have some paint to match and an apostrophe to add...