The Cost of Being a #Hypochondriac

If you're considering becoming one and are curious about the cost of being a hypochondriac, I can tell you. It's $180 and some change.

Until the fall of 2014, I would never - NEVER - have classified myself as one of those people. Those people who think every mole is cancer, every leg cramp is a blood clot, or every headache is a tumor. I'm an INTJ (just not embracing it as much), I'm rational, level-headed, and not inclined to panic. For heaven's sake, I'm the daughter, granddaughter, sister, and niece of physicians, and I picked up quite a bit of the lingo during my 15-month stint as a pharmacy tech. Me? A hypochondriac? HA!

And then I had the gallbladder colic. Writhing on the floor in our bathroom while our guests sat at the dining table, I realized that I had never before experienced any real pain. I had never had anything really wrong with me. If this came out of the blue, what else could? And just like that, the seed was planted.

I put off having my gallbladder plucked out last spring by suggesting that we "wait and see" if I had another attack. Everyone said I'd be back. Over the course of the summer I felt okay. Never really GOOD, but okay. From time to time I started dealing with bouts of nausea - never vomiting, more like I was randomly carsick. Summer turned to fall and one morning in October I woke up feeling an immense sense of dread. My heart was racing, I felt like I couldn't breathe, and in that instant my inner-hypochondriac emerged. I was having a heart attack. This was it - "the big one, Elizabeth!"

As it turns out, I wasn't having a heart attack. Peter prayed for me, I paced the floor of our bedroom, drank a lot of water, took some deep breaths, and eventually felt okay. After Peter left for work, I went to Dr. Google - and that's when my inner-hypochondriac turned into a raging beast. Every twinge, every ache, every moment of soreness - off to Google I went, coming back with two options: I was feeling the normal aches and pains that all humans feel, or I was dying. If you've ever been to WebMD, you know what I'm talking about. 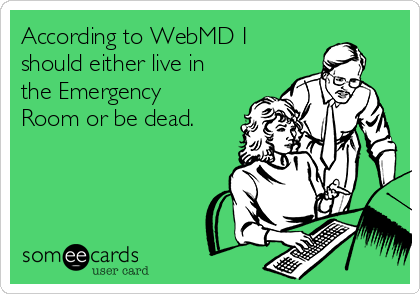 On my birthday in early December, the Hubs took me out for a nice steak dinner which I picked at, feeling nauseated again. It was at that point that he'd had it, and told me to call my doctor because this had gone on long enough. Whether I was dying or just paranoid, I was tired of not feeling normal and of being randomly queasy, so I made an appointment to see my GP on Christmas Eve.

As I sat in her office waiting to see what she would tell me, I wondered how I got here. How had I allowed myself to become so consumed and focused on every ache and pain that I was now in a doctor's office the day before Christmas? As I explained my symptoms to the (unsympathetic) nurse, I started to feel my face flush in embarrassment. That humiliation skyrocketed when my doctor came in and said, "Anxiety causes physical symptoms like you've described, and your gallbladder is causing the rest. Stop looking at Google." BUSTED.

For the month since she called me out, I've been focusing a whole lot more on my relationship with the Lord, and a whole lot less on Googling, "why are my shoulder blades sore?" The lessons I have learned - both Spiritual and personal - in the last month could fill up several blog posts, but needless to say, the first step to a cure is admitting you have a problem. I had a problem - several, actually: I was inwardly focused, prideful, arrogant, and blind. Google doesn't have a solution for that... but my Heavenly Father does, and He's been working hard on me the last few weeks.

I'm scheduled to have my gallbladder removed next week, because that really is part of the physical aches and pains (and nausea) that I've been experiencing. While no one likes to sign a piece of paper that says, "I understand I could die and I won't hold the doctor responsible," I'm excited about the prospect of feeling normal again. And more than that, I know that no matter what happens - next week or for the rest of my life - I can rest in Psalm 48...

In the meantime, I got the bill for my Christmas Eve appointment this week and I now know the cost of being a recovering hypochondriac. Sometimes the lessons we need to learn aren't cheap, but they are important. Now if you'll excuse me, I need to get on with the business of living.


#iamthankful for God's faithfulness to me - at all times.
Email ThisBlogThis!Share to TwitterShare to FacebookShare to Pinterest
Labels: #iamthankful, #WorkInProgress, INTJ