PERSONAL NOTE: Okay, look. A.W. Tozer was a human, just like you and me, and no, he wasn't perfect and no, he doesn't have all the answers, but... he sure gives one a lot of food for thought! 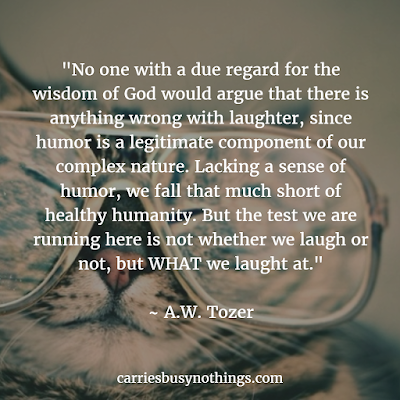 Last week I shared about a God-led decision to remove films and shows that we previously considered "family friendly" from our home movie collection - sacrificing the sacred cow of entertainment, if you will. This personal upheaval in "life as usual" is more complex than I have time - or desire - to unpack in a single blog post, but the simple version is that God, through the work of the Holy Spirit, has caused us to rethink our standards. {There's another post in the works that digs a little bit deeper into that aspect. Look for it soon, if you're interested.}

And while that is the Bottom Line (obeying God by not ignoring the conviction we feel), based on some of the comments I received after the last post, I realized that I needed to clarify a few things.

For example, at this time we're not purging ALL films and shows (Andy Griffith and Fiddler on the Roof are still very much in our home DVD collection), nor are we ripping down the screen and projector to sell on eBay. In fact, you will still find us on the occasional weekend with a bowl of popcorn, snuggled down in blankets and pillows, watching one of our Pixar favorites, like The Incredibles. But even that may change in the future if God nudges - we're open to wherever He takes us on this journey.

What changed for the present was our perspective on the films that we previously accepted without batting an eye, taking a different view of them now based on the subtle undertones (premarital living arrangements, casually taking the Lord's Name in vain, or the prevalence of sexual innuendos) compared to the Biblical model of becoming more like Christ. It looks less like, "TV is a tool of the devil, right up there with drums" and more like the old cliché, "if Christ joined us on the couch, would we still be comfortable laughing at this?" 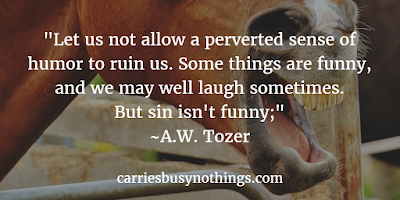 In fact, this whole change in perspective isn't really about the medium. I can already tell that this train of thought is going to end up overflowing into books {Collective Bookworm GASP!} and social media. God's working on me, reminding me to play an active role in assessing what I see and hear when I'm watching a show, listening to a song, reading for pleasure, or even what I'm passively viewing while I kill time on Facebook. Facebook. That's a whole other post. But I'm a grateful work-in-progress... so stay tuned. You never know what's next!

A.W. Tozer posed a good question for all Believers: What are we laughing at? Are we laughing at sin? Trust me... it creeps in so easily! For almost 20 years the Hubs and I have laughingly quoted a line from a well-known 90's chick-flick. It starts with a word we wouldn't say in front of our mothers, but we clean it up - of course - by substituting "beep" for the word. If you're reading this thinking, "How does that make it better?" then you now realize that we're not as smart as you might have previously thought. It seems obvious now, but for almost two decades (that's embarrassing!) it hasn't been something we've thought about when we say it, because it made us laugh. What are you laughing AT?

Moving on... I also realize that some people may have read our decision and seen it as legalistic. Make no mistake: this decision to purge various entertainment items has nothing to do with our salvation (Ephesians 2:8 & 9). Our eternal security does not rest on our entertainment choices (thank the Lord!), but our growth as Believers does. It's time for us to listen to the still small voice of the Holy Spirit as He guides us in our walk with Christ, even when He moves in previously "off limit" areas, like what we do to relax and unwind.

Finally, yes, God is working in each one of our lives in different ways, and as Believers we are each at different stages of the Christian journey. However, don't use that as an excuse. If you read about our choices last week and it made you uncomfortable (or even angry - hey, I've been there reading about the decisions of others!), maybe you should ask yourself, "why?" My point, last week and today, is this: look at the areas in your own life that are, even unknowingly, off limits to God. Ask yourself why it's off limits, and what scares you about offering it to Christ if it means growing to become more like Him.

If someone told me 6 months ago that I would eventually purge two-thirds of our DVD collection, I would have snorted. Relaxing with a movie (or two or three) was my idea of a great Friday night. To give that up would be painful, and (Heaven forbid) I would be bored. Yet here's what I've discovered in the last month: when you start opening previously closed off areas of your life to God, relinquishing ownership gives freedom rather than feeling like a sacrifice. (Romans 8:5 & 6) Gray turns to black and white.


What's in YOUR off limits area? 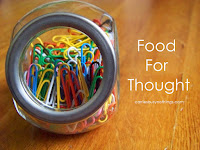