Wednesday Book Recommendation: May Booking It 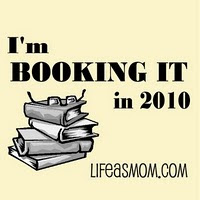 It's the end of the month which means it's time for me to review my May Booking It selection: Eats, Shoots & Leaves

by Lynne Truss. Head on over to visit Jessica at Life as MOM for more great reading ideas.

I have honestly laughed my way through this book. I haven't had a lot of reading time lately, but when I do get a chance to sit down I always have this close at hand. Rather than boring you with my take on it, I have chosen to let Ms. Truss speak for herself by sharing sections and quotes from Eats, Shoots & Leaves

that I found humorous.
From the Introduction - The Seventh Sense:
Part of one's despair, of course, is that the world cares nothing for the little shocks endured by the sensitive stickler. While we look in horror at a badly punctuated sign, the world carries on around us, blind to our plight. We are like the little boy in The Sixth Sense who can see dead people, except that we can see dead punctuation. Whisper it in petrified little-boy tones: dead punctuation is invisible to everyone else - yet we see it all the time. No one understands us seventh-sense people. They regard us as freaks. When we point out illiterate mistakes we are often aggressively instructed to "get a life" by people who, interestingly, display no evidence of having lives themselves. (pg. 4)
From the Chapter: Airs and Graces:
The dash is less formal than the semicolon, which makes it more attractive; it enhances conversational tone; and, as we shall see in the next chapter, it is capable of quite subtle effects. The main reason people use it, however, is that they know you can't use it wrongly - which, for a punctuation mark, is an uncommon virtue. (pg. 122)
There are times, however, when the semicolon is indispensable in another capacity: when it performs the duties of a kind of Special Policeman in the event of comma fights. If there is one lesson to be learned from this book, it is that there is never a dull moment in the world of punctuation. One minute the semicolon is gracefully joining sentences together in a flattering manner [...] and the next it is calling a bunch of brawling commas to attention. (pg. 125)
I have been told that the dying words of one famous 20th-century writer were, "I should have used fewer semicolons" - and although I have spent months fruitlessly trying to track down the chap responsible, I believe it none the less. If it turns out that no one actually did say this on their deathbed, I shall certainly save it up for my own. (pg. 127)
And I could go on and on, but I won't for fear that I would bore to death those who don't find punctuation as interesting as the rest of us freakish sticklers. There will always be a missed comma or a misplaced apostrophe - I'm afraid I'm even guilty of that at times - but in a very unique and fun way, Lynne Truss has managed to make boring punctuation enjoyable again.
My June Booking It selection is A Connecticut Yankee in King Arthur's Court by Mark Twain. I'll be linking this up to the next Booking It post over at Life as MOM when the time comes. In the meantime, thanks for stopping by and feel free to say hello and tell me what you have been reading these days.