Do you keep stuff out of guilt? I know I have. There are items that have been saved for years because I fear that the giver might someday pop in and say, "Where's that [insert various items here] that I gave you?" As we've moved and traveled and returned home, I've gotten better about detaching the feelings for the giver from the gift that was given, but it's still hard at times.
And then there's the guilt of realizing that something that you paid good money for because it fell into the categories of "loved" and "had to have", no longer fits your taste or style. I was eighteen when we got married and nineteen when we purchased our house - now thirty is less than three months away and my decorating ideas are very different than they were ten or eleven years ago.

When we moved into our house, I went with very wintry colors - navy, dark green, dark red, and khaki. Our living room was awash in Waverly rose-covered pillows, curtains, and a 5 x 8 rose-covered area rug. To match the rose garden theme (unintentional, but factual never-the-less), I purchased two framed rose prints at Target for $39.98. I thought they were beautiful, but when I took them home and showed Peter, he thought they were overpriced and horrible. However, he graciously hung them in our living room and I thought they were perfect while he decided they weren't worth fighting over.

Guess what? Ten years have passed and while rearranging all of our wall art last week, I stood in the living room staring at those rose prints and thought, "Peter was right." I also realized that I had enjoyed them for ten years, but there was no reason to hang on to them now, simply for the sake of $39.98.

Over the last month, I've been eyeing everything in the house and asking myself, "Do I LOVE it or am I keeping it because it's been hanging there for 10 years and I don't even notice it any more?" While I'm itching to re-paint and tear out walls and rip out ceilings, it's much cheaper (and easier) to change small things - like what I've got hanging on the walls.

What I've discovered in the last week is that there are many items in our home that have little to no significance, and a few that are quite special, like this little guy. 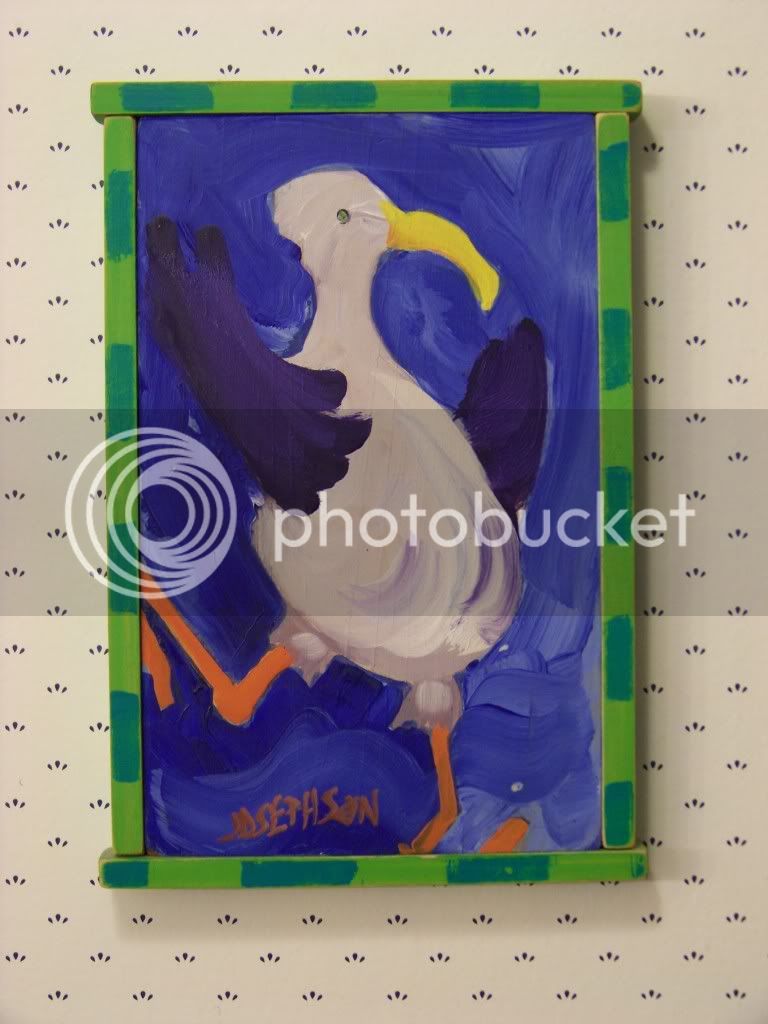 While wandering around Freeport, ME some eight years ago, Peter and I stopped for lunch at a great little hole-in-the-wall seafood restaurant. They were displaying the paintings of a local artist and we fell in love with this quirky seagull. An elderly customer at the restaurant stopped to tell us  that we were so wise to be investing in art. We laughed because we weren't buying it for an investment, we were buying it because we liked it! That's when we first realized that art isn't about what others have or like or what's in style at the moment, art is personal.

Over the last week I've been giving careful thought to each item that graces our walls and deciding if I like it enough to keep it or pass it on. I've also been purging the walls of "fillers", just like I've been purging the household closets and drawers and storage spaces. I've changed from the person who needed something hung on every wall, to the person who only wants to hang art or photographs that have some meaning.

The art in the library is special because it represents different parts of our lives. I love the newly purchased alphabet poster because it ties in the aviation side of us in such a fun - but not in your face - way. I adore my photo that I had printed on canvas which shows the remaining smokestack in our town - an ode to the German heritage that built our little city. Hanging just above the canvas is a reprint of a photograph taken of the downtown in the late 1930's - at the height of the factory boom.

And then there's the tie-in to my college days. I've loved this print for as long as I can remember. The workers apparent lack of concern about how high they are or where they eat their lunch simply astounds me (even as I look at the photo of my print, my hands are showing signs of clamminess - I hate heights!). I was a newly arrived college freshman when I picked up this poster at a Target outside of Boston (memories in and of itself). It hung on my dorm wall all year with that lovely sticky putty that all dorm dwellers are required to use, but once Peter and I were married the following June, we framed it and it's been hanging in our home ever since.

And one cannot forget the important family memorabilia, like this official White House photo of my grandfather (then-president of Lions Club International) with President Richard Nixon. Priceless. Or the three photographs of my mother's childhood home that I found while moving my grandmother into a nursing home before she passed away - also priceless mementos that aren't going anywhere. 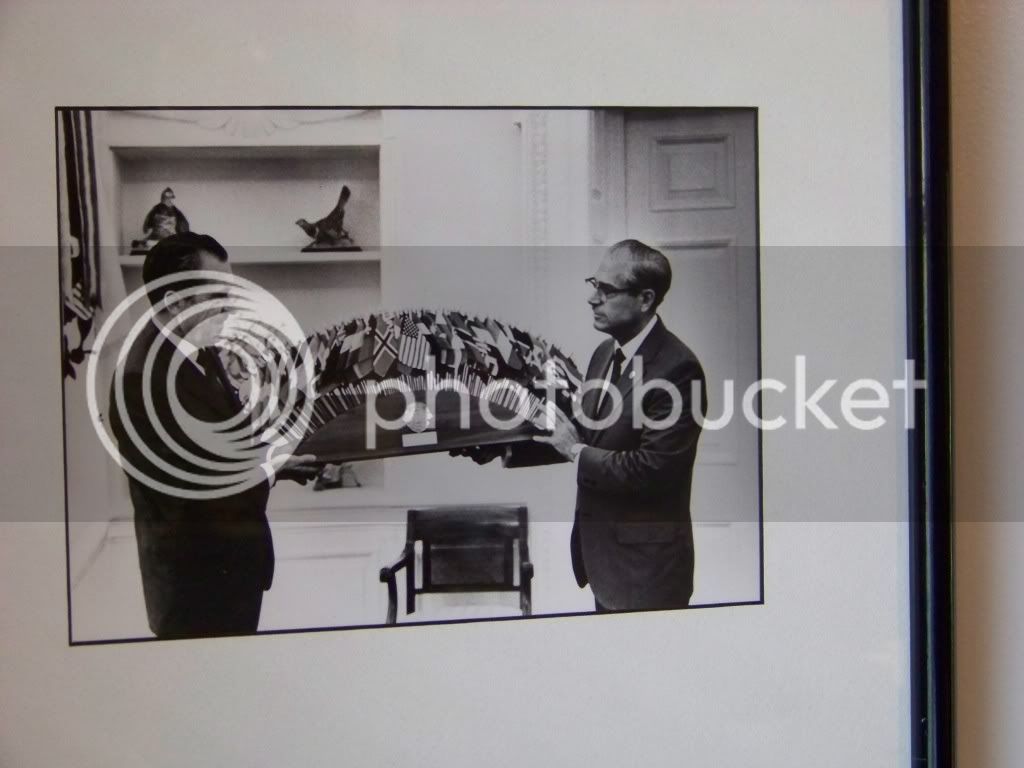 In the dining room (yes, I'm beyond-tired of that striped wallpaper, though I loved it when it first went up) I cleared off the walls and started over. What made the cut were were the two paintings I received as a birthday gift (I think my 14th or 15th) and as a wedding present - painted by my friend, Beth. I also pulled this chalk drawing out of the office (where no one ever saw it) and hung it where we can be reminded of our former travels. It was one of the last things we purchased before leaving Lesotho back in 2008, and we bought it off a man who was walking down the street in the capital city. And finally, I swapped frames, ditched a "filler", and moved this plate (also a sentimental wedding gift from friends) so that it now hangs directly below the photo (another wedding gift!) of the church where we were married.

The infamous rose lithographs are still hanging in the living room, but their days are numbered. For the present, I've cleaned off the walls, removed several photographs and a photo board, and replaced them with four of my favorite photos from our time at a game park in Tanzania. What was once cluttered with multiple photos of varying sentimentality is now simplified with four photos that bring a smile to my face. Our wedding picture has been reframed and returned to its spot by the front door, and my mother-in-law's beautiful cross-stitch wedding gift is the first thing you see as you come in our home. These are the things that I want to be on display - not something impersonal that I picked up for $39.98.